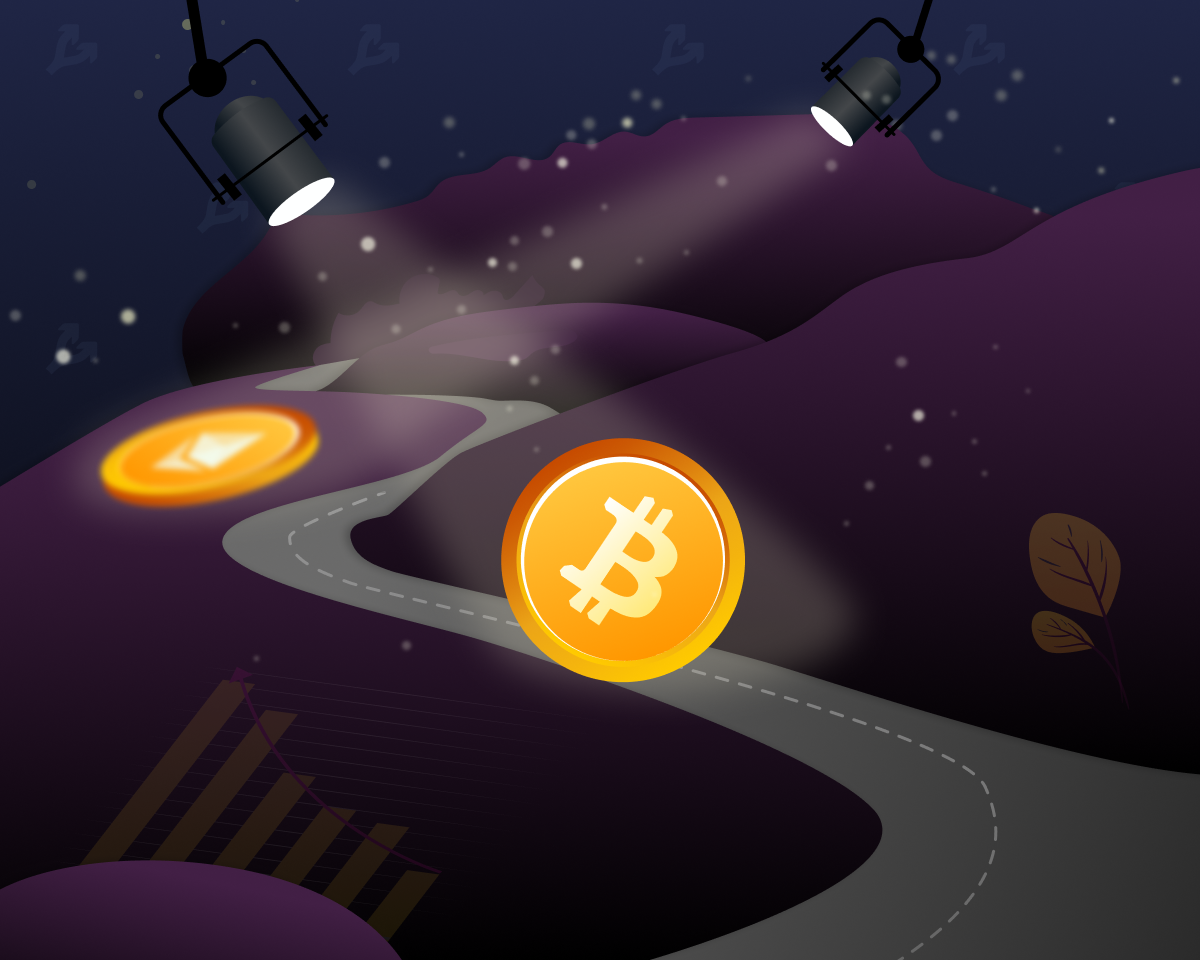 2020 has turned out much better for long-term investors than the previous year. The market capitalization of 30 key assets of the cryptocurrency market has grown by 308%, according to a report from CoinGecko.

The growth of the 30 most capitalized cryptocurrencies over the past year was five times higher than in 2019 (308% versus 62%). Portfolios with DeFi protocol tokens gained 718% on average.

The total capitalization of cryptoassets from the top 30 in 2020 increased by $ 552 billion. In the top five coins, bitcoin showed the best results, having risen in price by about four times (in 2019 – by 95%). Ethereum looked even better, the price of which rose by 472% after near-zero dynamics over the previous 365 days. 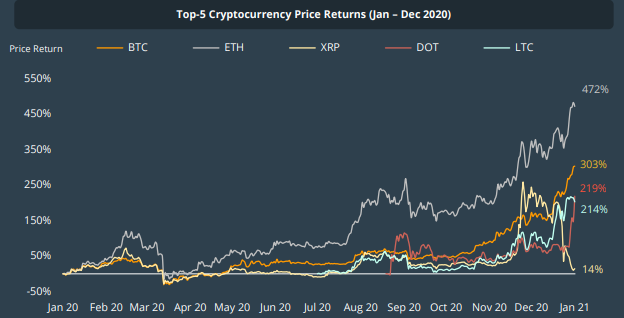 The largest stablecoin Tether (USDT) also increased its market share – from 2.4% to 2.9%, while the share of other coins from the top 8 decreased. The market was significantly influenced by the debut of Polkadot (DOT), which accounted for about 1.2% of the total capitalization. 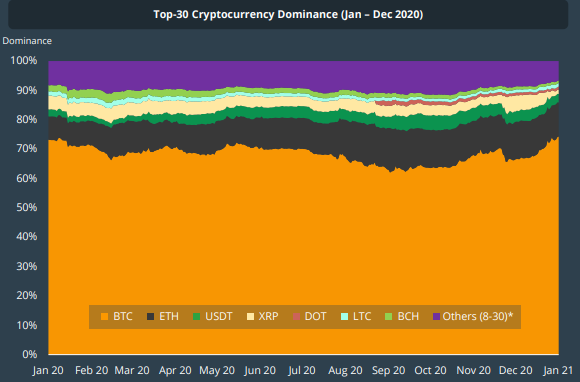 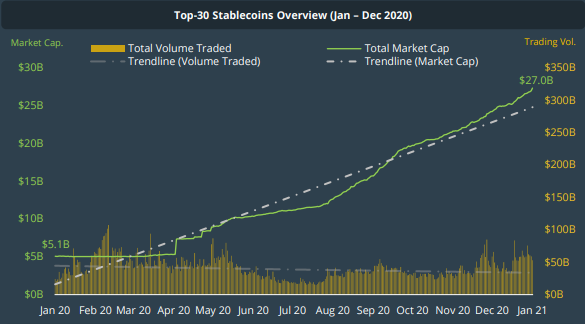 The volume of the DeFi token segment in September reached 4.6% of the total cryptocurrency market capitalization. By the end of the year, the ratio had dropped to 2.5% amid growth in other coins.

The Chronicles of DeFi in 2020: Explosive Growth, Challenges and Barriers for Institutions

At the end of the year, the capitalization of decentralized finance tokens exceeded the summer peak by 4%, amounting to $ 20.4 billion. Analysts did not rule out the resumption of DeFi mania in the event of a decrease in the bitcoin dominance index. 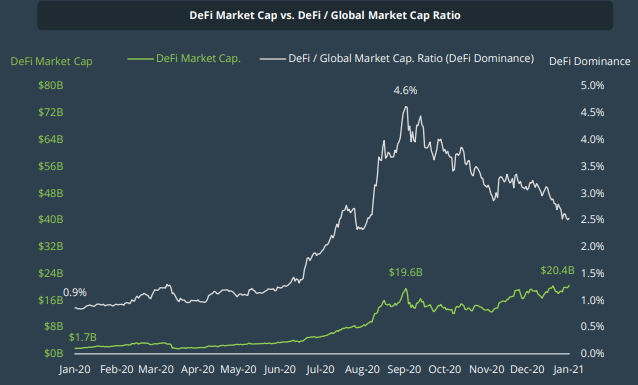 Analysts compared the current Bitcoin rally to the 2016-2017 bull market, when the price of the first cryptocurrency rose by 4527%. Growth of 303% in 2020 exceeds the intermediate results in the previous bitcoin cycle (+ 130%). 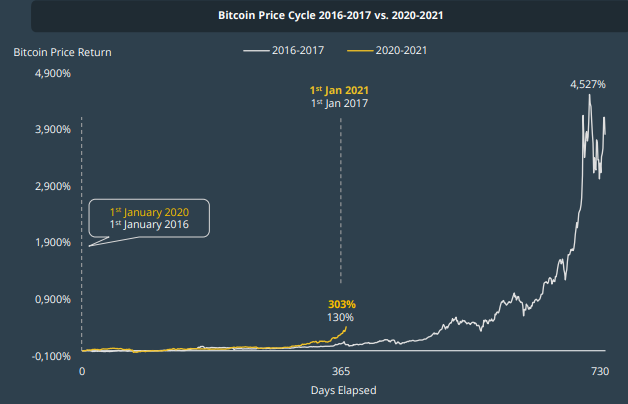 Experts saw the possibility of repeating the dynamics of four years ago thanks to three drivers:

In 2020, bitcoin looked much better than indicators of traditional assets. In comparison with the leader Nasdaq Composite, the growth was seven times higher – 303% versus 43%.

Analysts mentioned the collapse on March 12-13, when Bitcoin fell immediately by 35%. The oil prices dropped more strongly during the day (-45%). 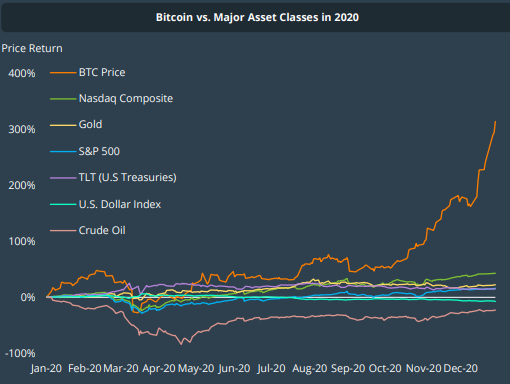 During the growth of bitcoin by the end of 2020 to levels above $ 29,000, its capitalization became almost equivalent to the value of Facebook, accounting for 5.6% of the assessment of all mined gold.

ForkLog previously reported that institutional investors have acquired a total of over 1M BTC (~ $ 37B).

Analysts at JPMorgan believe that for the rally to continue, Bitcoin must gain a foothold above $ 40,000.