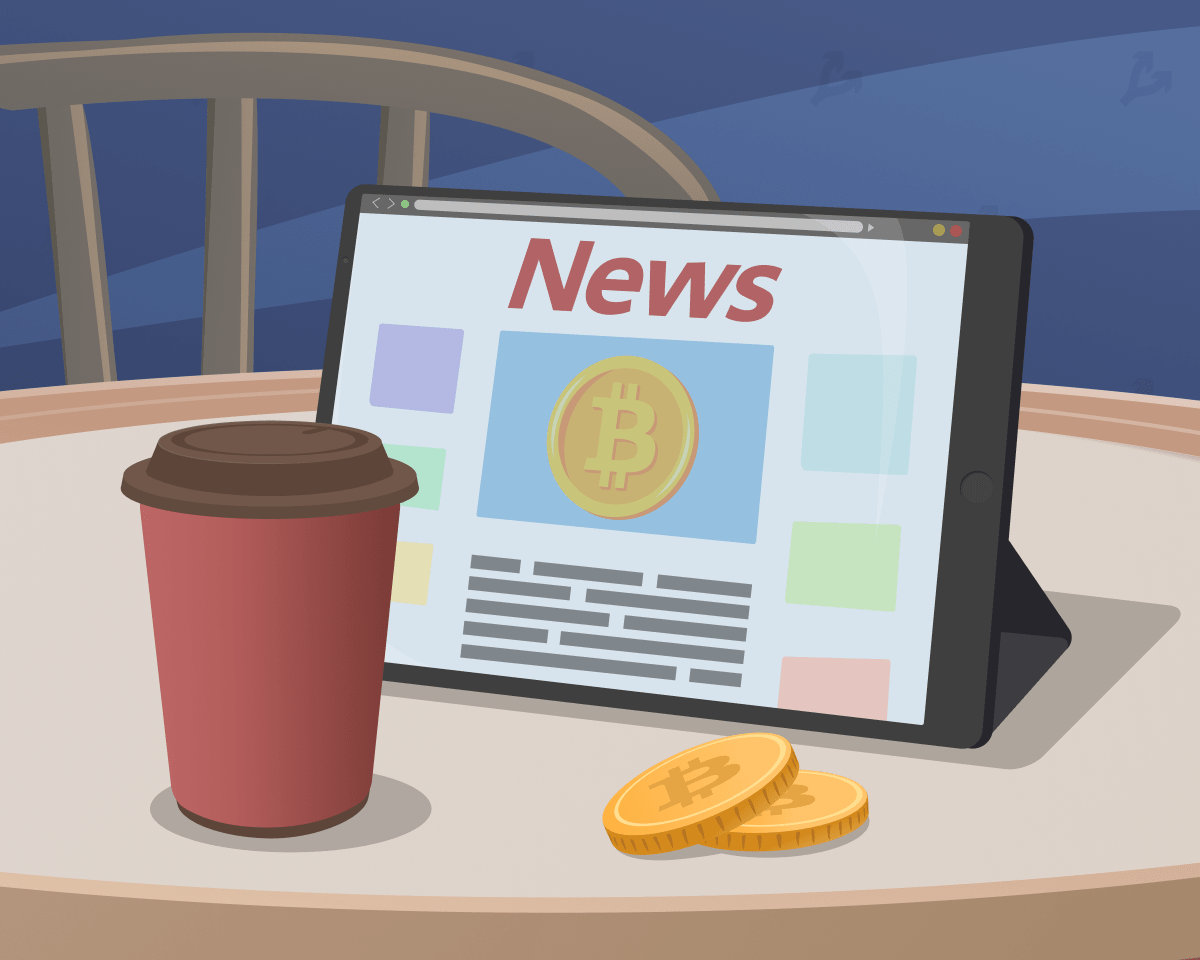 Elon Musk called himself a bitcoin supporter, but again tweeted about Dogecoin, the Ethereum price reached a new record, Forbes listed crypto billionaires, Binance launched a cryptocurrency analogue of PayPal and other events of the week.

The second largest cryptocurrency by capitalization broke through three psychological levels during the week, updating price records. On February 2, Ethereum quotes crossed the $ 1500 mark, and a day later – $ 1600. On Friday, February 5th, the price set a new high above $ 1,700.

Amid the coin’s rally, the average transaction fee on the Ethereum network exceeded $ 20, also setting a record. 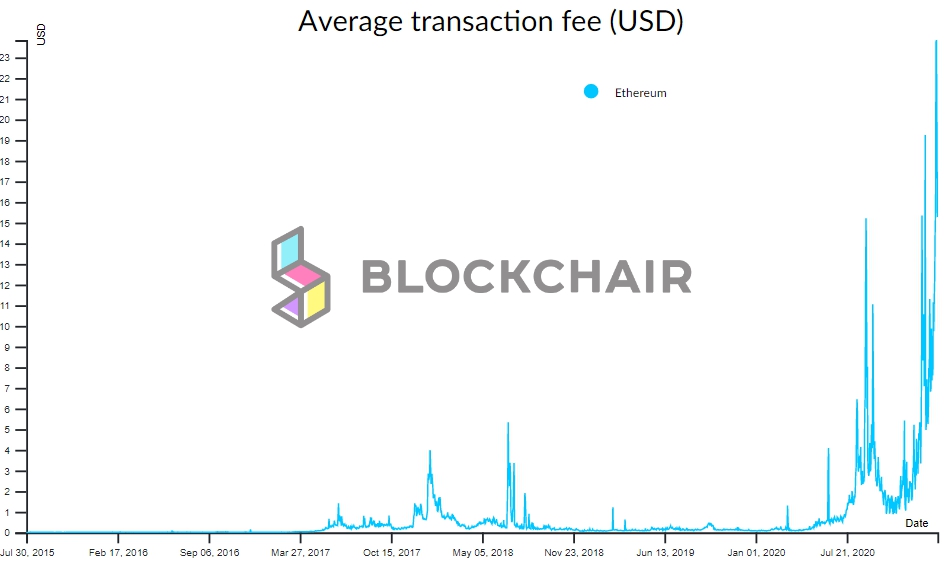 The bitcoin rate grew throughout the week and on Saturday, February 6, it temporarily returned to levels above $ 40,000. This was accompanied by an increase in the network hashrate of the first cryptocurrency to a record 174.9 EH / s, according to Coin Metrics.

The founder of Tesla and SpaceX Elon Musk Elon Musk, who a few days ago provoked the pump of the first cryptocurrency through his Twitter account with almost 46 million subscribers, promised to be more careful with his comments during a conversation on the Clubhouse platform.

“I’m a bitcoin supporter. I believe the financial world is close to widespread acceptance. I have no opinion on other cryptocurrencies, ”Musk said.

However, he followed up with a series of tweets about Dogecoin (DOGE). The price of the token increased by almost 50% per hour. This is not the first time that Musk’s messages have sharply thrown up the quotes of a meme cryptocurrency.

On Sunday, February 7, the price of the Cosmos cryptocurrency (ATOM) rose to $ 14 (on the Kraken exchange), updating its all-time high. The coin is ranked nineteenth in terms of market capitalization (according to CoinGecko).

Over the week, the cryptocurrency market capitalization increased to $ 1.18 trillion, the bitcoin dominance index fell to 60%. 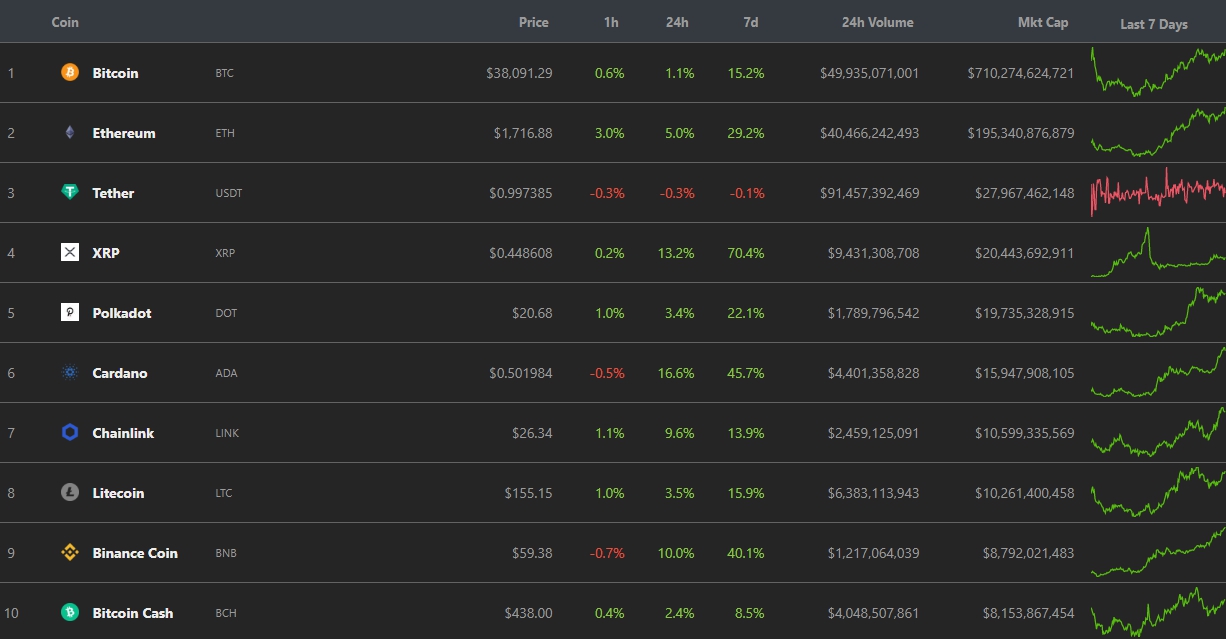 The list of the wealthiest representatives of the cryptoindustry compiled by Forbes includes 11 billionaires. Brian Armstrong, CEO of Coinbase, topped the rating. His fortune is estimated at $ 6.5 billion.

The magazine took into account not only the value of digital assets, but also the shares in companies associated with the persons involved and traditional assets.

Cryptocurrency exchange Binance has launched a beta version of its own payment service.

Binance Pay is available to registered users on the exchange. The process of creating an account in the system provides for the passage of KYC procedures.

The company said that the beta version supports the native token of the BNB exchange, the Binance USD (BUSD) stablecoin, Bitcoin (BTC), Ethereum (ETH) and one fiat currency, the euro. Also, users have access to the ecosystem token of the issuer of bank debit cards linked to digital assets Swipe (SXP).

On the eve of the announcement of the launch of the payment service, Roskomnadzor announced the exclusion of Binance from the register of domain names containing information prohibited in the Russian Federation.

The head of PayPal promised to expand cryptocurrency services

Dan Shulman said the company is actively investing in a cryptocurrency division that has more than met expectations. He promised to present an “extended roadmap” in the context of blockchain and digital currencies during 2021.

PayPal’s total revenue for the fourth quarter increased by 23% to $ 6.12 billion in the fourth quarter. The financial results were positively impacted by the support for cryptocurrencies, which appeared for PayPal customers in the United States on November 12.

Specific figures in the context of digital assets were not disclosed. However, it is known that on January 11, users made transactions for a record $ 242 million. The company did not include those related to cryptocurrency in the total volume of payments.

According to Shulman, it is also known that PayPal users who have purchased cryptocurrencies log into their account twice as often as before the purchase.

Visa will test a solution for integrating bitcoin payments by banks

The company will provide a technical solution for the integration of cryptocurrency payments by traditional banks.

The first client will be First Boulevard, an African American community-focused bank, which will be able to buy, store and trade digital assets.

On the night of February 2 to 3, 75 Ethereum 2.0 validators supported by the Staked cryptocurrency staking service lost part of the deposited funds – the service tried to increase the attestation rates to increase revenue.

Now the funds are blocked until the full-scale launch of the network, the addresses are deprived of the opportunity to earn money, since the balance of each of them fell below the threshold values.

Twitter founder and CEO Jack Dorsey launched his own full network node for the first cryptocurrency. He posted a screenshot of a computer screen with the phrase “Bitcoin working”.

He posted a screenshot of the synchronization of the node with the blockchain, the volume of which is 325 GB. The process can take up to several weeks, at that time the progress was just over 2%.

Dorsey was asked if he was running a node on a dedicated single-board Raspberry Pi, to which a well-known proponent of the first cryptocurrency replied that he had chosen the new Macbook Pro M1.

The popularity of the WallStreetBets (WSB) movement on the Reddit platform has influenced cryptocurrency subreddits as well. Since January 30, the number of subscribers to the r / Bitcoin community has increased by 300,000, exceeding 2.3 million by the end of the week.

The media even reported on a possible film adaptation of the story of WSB’s struggle against Wall Street by Netflix and MGM. The film of the latter is supposedly to be produced by the Winklevoss brothers, based on the yet-to-be-written book by Ben Mezrich, the author of Bitcoin Billionaires about the Winklevoss brothers and “Reluctant Billionaires” about the history of Facebook.

During a conversation on the Clubhouse platform, where Elon Musk admitted his interest in bitcoin, the head of the Robinhood trading platform Vlad Tenev explained the suspension of trading in GameStop and AMC Entertainment shares as an “unprecedented burden” and the need to comply with regulatory capital. The company applied for additional funding and raised $ 3.4 billion within four days.

The Financial Services Committee of the US House of Representatives intends to study the fact of collusion of the Robinhood platform with large hedge funds. Hearings are scheduled for February 18th.

In 2020, the total volume of cryptocurrency payments on the darknet amounted to $ 1.7 billion. The three leaders in terms of the turnover of funds on the black market included the Russian Federation, the United States and Ukraine.

In the Russian Federation, the annual turnover of cryptocurrency on the darknet has exceeded $ 288 million, in the USA – $ 179 million, in Ukraine – $ 98 million.

The fourth line of the anti-rating was taken by China with an indicator of $ 87 million, the top five was closed by Vietnam – $ 56 million.

What to read, read and see?

On Monday, February 1, two speakers joined the ForkLog broadcast. Technical issues were discussed with the developer of Bitcoin Core Gleb Naumenko, the market and charts – with Ton Weiss.