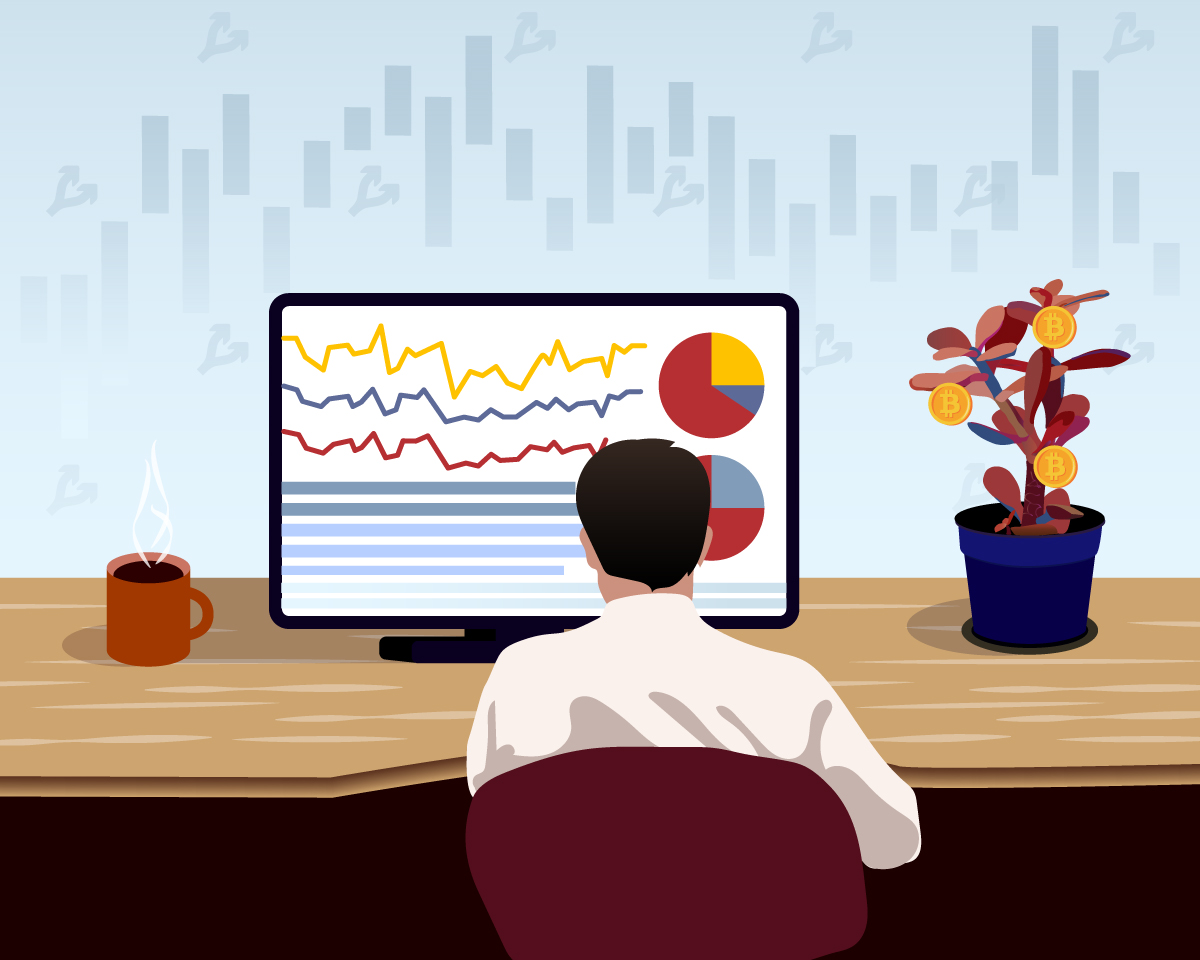 The digital currency is actively recovering from a deep correction. It was important for buyers to show a rebound from the support area near the $ 42,500 level.

Many investors are scared by this volatility of the coin, even large hedge funds are confident that as soon as the movements become less strong, the number of institutional investors willing to invest in this asset will grow significantly.

Analysts from Citibank are of the opinion that a turning point is coming for bitcoin and the cryptocurrency will either be able to take the place of the world’s main means of payment, or it will all end in another speculative sale.

JPMorgan employees actively recommend their clients to hedge against other types of assets (such as stocks and precious metals), and transfer up to 1% of their portfolio volumes to Bitcoin and other digital currencies. 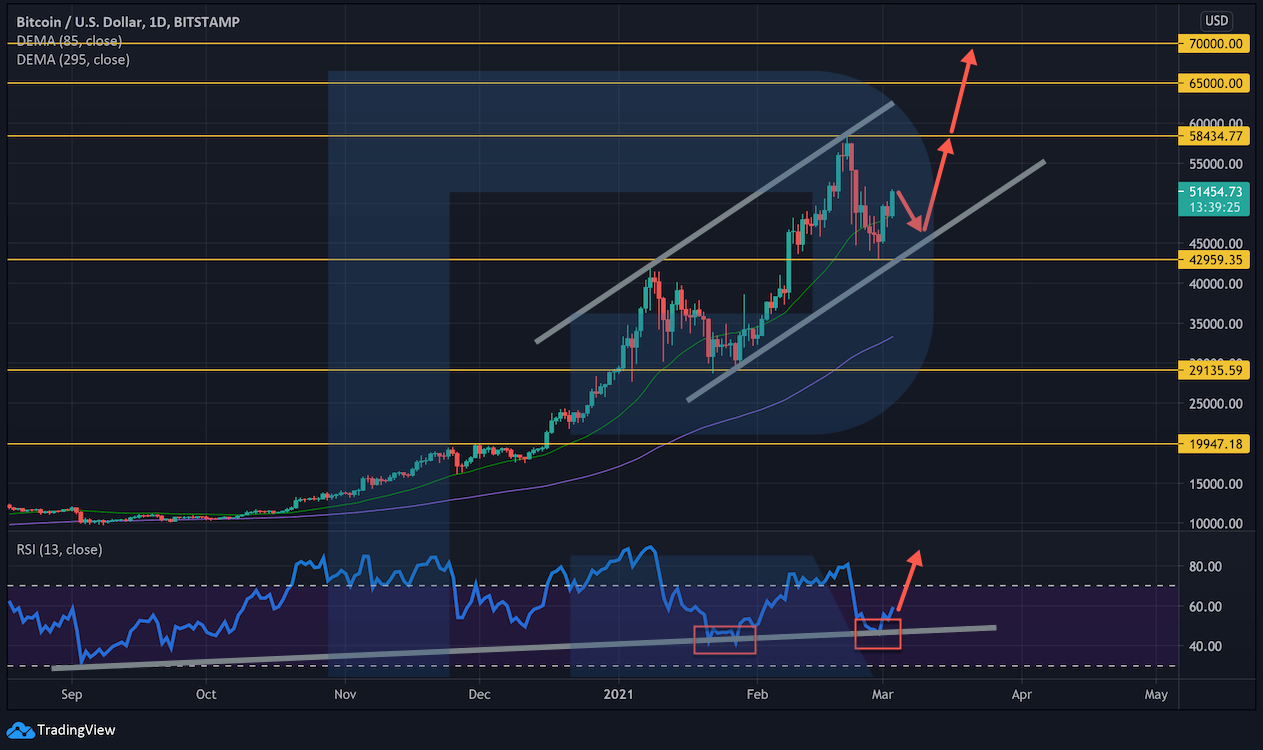 On the daily chart of the cryptocurrency, another rebound from the area between the moving averages took place, which still indicates the presence of a bullish momentum. The previous move triggered an increase in the value of the coin by more than $ 29,000.

Perhaps now it is also worth considering the rise of asset quotes to the level of $ 72,000-75,000. An additional signal in favor of the further development of the upward movement is another rebound from the support line on the RSI indicator. Cancellation of the scenario with growth will be the breakdown of the lower boundary of the ascending channel and the price fixing below the $ 42,950 level, in which case the target of the decline will be the $ 29,135 level.

The growing criticism of the asset cannot stop the current rise in the price of an asset. Bill Gates is convinced that conducting transactions on the bitcoin network consumes too much electricity, not comparable in cost to traditional money transfers, which ultimately causes serious harm to nature.

Many investors are convinced that the current aggressive rise in the price of bitcoin is only a temporary effect, which was caused by increased interest from large investors. Ray Dalio noted last year that as cryptocurrencies grow and become widely adopted, assets may face aggressive criticism, as well as a potential ban from the authorities. We are witnessing a similar situation now. 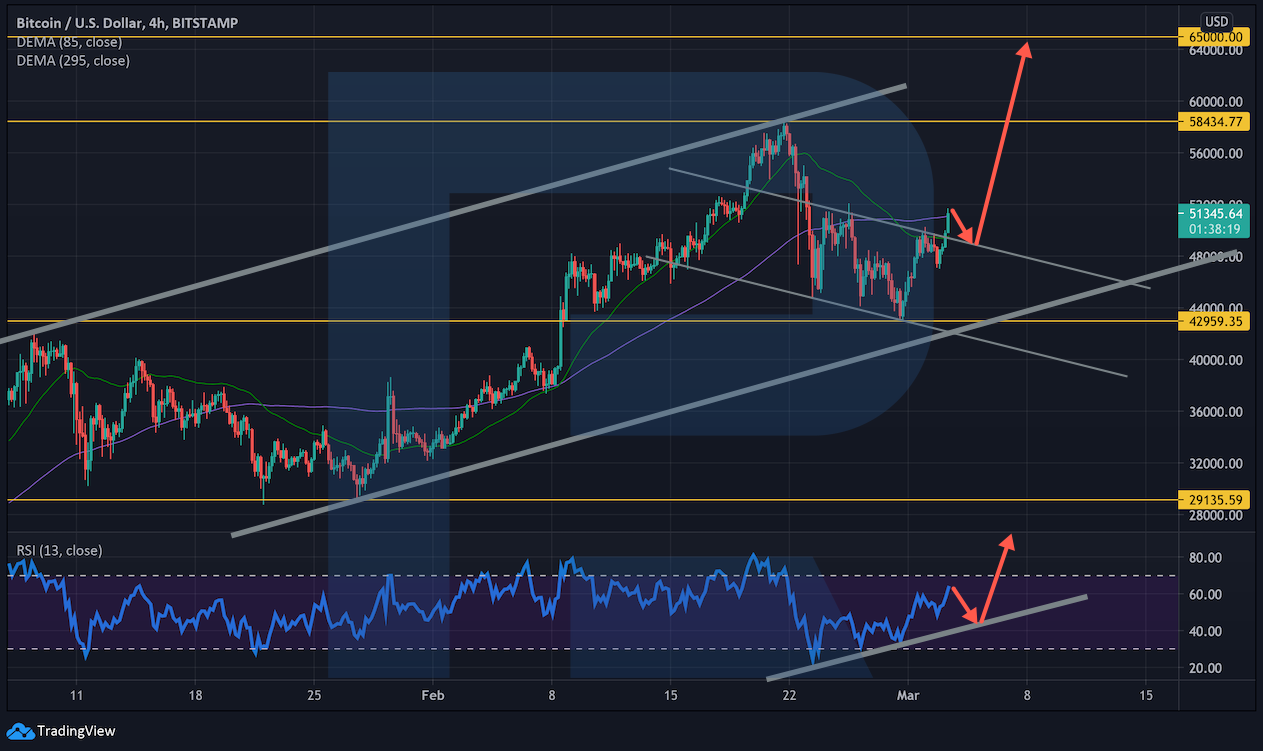 On the 4-hour chart, the quotes broke up the descending channel. The potential remains for the price to continue to rise to the level of $ 65,000. However, one should also not exclude the growth of the asset value only after returning to the broken border. A strong signal in favor of a rise will also be a rebound from the support line on the RSI indicator, which had previously provoked an increase in the value of bitcoin at the time of the test of the support area.