Let’s start with a traditional table 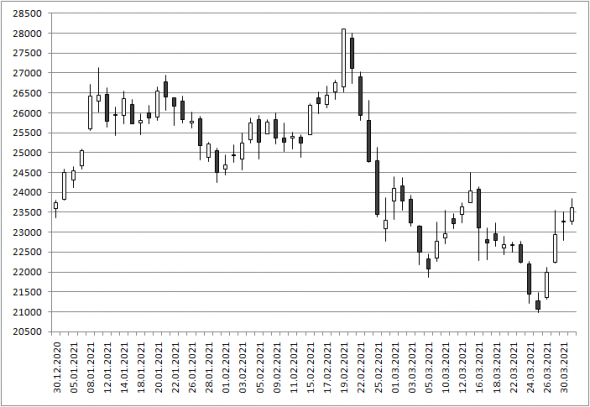 And here is the RI dynamics from March 17th to 31st, an example of a bad market for my systems. 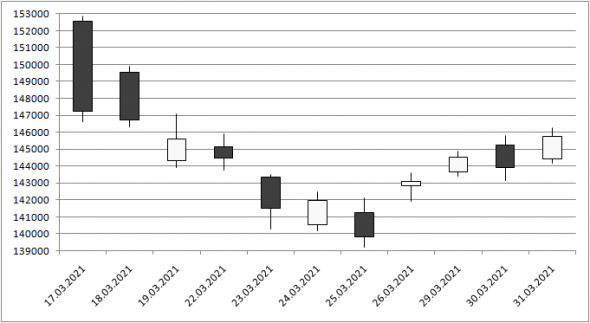 Moreover, at the end of the day on March 16, my systems went out without opening shorts because of the enabled “shoulders” filter. The result from the beginning of March to the limits was practically zero (-0.32%). However, this was followed by a period of losses with only one profitable day – March 29. In the period from March 17 to 23, “only long with a leverage” was traded. And if during this period only systems based on intraday horizontal levels were “divorced” (systems with levels based on “daily” were out), then from the 24th the “long + short without shoulder” mode was switched on and at the end of the day On the 24th, all systems were already in the long. Well, what the full long on the 25th brought in, we see on the chart, as well as the full short on the 26th opened the day before.

Why is the RI trend an outsider since the beginning of the year? Because by trading it, we are implicitly trading the portfolio

For those interested, this is explained below in PS.

Why don’t I trade systems in Si with an average time in a position of about 2 days? When I put Si in a trade at the end of 2014, these systems were the best in terms of “profitability-drawdown” in the test period 2008-2014. However, I noticed the instability of their results across calendar years. In particular, they finished in the red in 2010, 2012 and 2013. Why do I need additional losses in the years when my profitability and so “left much to be desired”? That is why I put into trade a worse, but more stable system in terms of calendar years with an average time in a position of about 9 days. You can see its actual result in line Si of the above table. And the shorter-term trend systems in Si this year “do not shine”, which is confirmed by my portfolio of Liquid Futures Wholesale, consisting of 4 such comona strategies: -10.38% per quarter.

And in conclusion, I note that before the June expiration, I decided to abandon the “synthetics” in SBER due to the fact that already twice in 2018 and 2020 the cut-off date for the payment of dividends was set after the June expiration, although the market always waited for it before … And this led to significant losses on this “synthetics”, which ate up almost the entire annual profit. In 2018, I did not fall under this “skating rink” only because I formed the “synthetics” after the OFZ repayment and at that moment the date had already been set, but on 04/02/2020 I “got it in full”.

Strategy profitability Become a qualified investor! in March it was -0.43%, which is worse than the result of Spot + Synthetics * 3/5, due to the profit on my account with GMKN. Almost the entire loss of this strategy since the beginning of the year is SBER trading.

“Russian Buffett” finished March in a good plus, and “bypassed on the turn” the Mosbirzh index from the beginning of the year. Its composition in the first quarter was:

For my coma indices, March ended in positive territory a little more than 1% and since the beginning of the year their result was

The results of their individual components since the beginning of the year can be viewed here or in the recording of the webinar held on April 1.

PS Let me remind you how the variation margin is calculated in clearing for 1 buy contract (not to be confused with long) at 18:45. She is equal

A revolution in the world of investment and finance

Let’s separate the near-market and info-gypsy

What does it mean?