I have said not once or twice that the policy of “targeting inflation” is a sabotage against the Russian economy. Here are just numbers

If you look at the line of averages, then who is not yet obvious what I said at the beginning of the topic?

We find the answers to them in the division of these years into two periods. 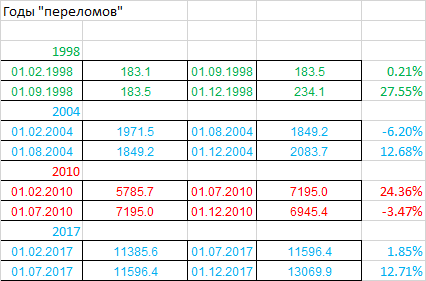 1998 and 2010 are the years of a change in monetary policy (MCP). We see that the soft monetary policy begins with the abolition of the currency corridor, and “inflation targeting” from 01.07.2010. And you also need to look at the GDP in these years by periods and also take into account the time lag, which makes the task of correct assessment very difficult.

What about 2004 and 2017? 2004, as we can see, is an attempt to start a tough monetary policy. But why are we abandoning it in the second half of the year? And those who remember that time know perfectly well what happened in the summer of 2004: the banking crisis. Fortunately, he cooled the “hot heads” and we abandoned the tough DCT until 2010. What happened in the second half of 2017? Well, again, the banking crisis and the reorganization of Otkrytie, BIN and someone else (I don’t remember who anymore). Again, we see that the monetary policy easing did not continue, as did the 2004 tightening.

And so the Central Bank again switched to a policy of raising rates … In a discussion on Facebook under my message:

“The rate has been raised. A country of unafraid idiots. And do they still hope for economic growth? “

I read only one thought with which I am ready to completely agree:

“If the rate is not raised, then by the September elections we will have inflation of 6.5% and the dollar at 80% © Alexander Baranov.”

But this only makes it sadder: the economy is “bent” for the sake of momentary politics.

In Luchka, some draftsmen

To the anniversary of Chernobyl